At work I did a course on improving my presentation skills. It was a two half-day course and on the second day we had to give a short (3 minute) presentation on a topic of our choice. I had just recently read a Wikipedia article about Märket Island and I wanted to share the story with the group. I've taken the content of my talk and written it up here. My slides are attached below if you want to take a look.

Märket Island is a small rocky 3.3 hectare skerry located half way between the Gulf of Bothnia and the Baltic Sea. The island is completely void of vegetation and is uninhabited. All in all it is a rather uninteresting island save for one unusual fact. But first a bit of history on the island.

Estimates say the island came into being around the 16th century due to changing sea levels and in the 1809 Treaty of Fredrikshamm, where Finland (under Russian rule) was separated from Sweden, it was decided that the border between the two countries should run right through Märket Island.

Owing to it's location in the centre of the strait and it's low elevation the island was a danger to shipping in the area. In 1873 alone 8 ships sank while trying to naviage around the island. The Tzar of Russia, Alexander III, seeing an opportunity to build an outpost of the Russian empire at it's most westerly point and also to protect his shipping he called for a lighthouse to be built on the island.

The Lighthouse was built and designed by the young Finnish architect George Schreck and construction finished in 1885. In the 1970's the lighthouse was electrified and automated and is still operational to this day. And now to the unusual fact.

At the time the lighthouse was being built no accurate maps of the island existed and whether by accident or deliberately the Finnish lighthouse was built on the Swedish side of the border. For almost 100 years this fact was either overlooked or brushed under the carpet and it wasn't until the 1890s that a group of surveyors, while doing a regular survey of the border, decided to set the situation straight. There were two conditions that their solution had to meet in order to be accepted by both countries:

The clever solution they came up with was to loop the border in around the lighthouse, putting it back on the Finnish side and then to loop back into the Finnish side so that Sweden kept the same amount of territory.

And that is how a small island less than 100m wide has a border crossing of over 1Km. 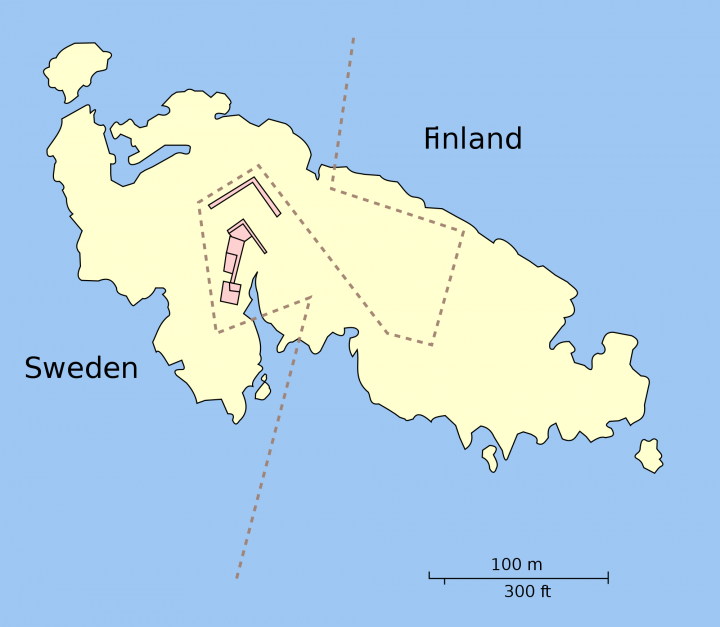